On Wednesday, January 18th, CIN-ergy opened the doors of a new office at Orionweg 30 in Leeuwarden, the capital of Dutch province Friesland. CIN-ergy is the R&D engineering and production department of CINOPTICS.

After a speech by founder Vincent Graham, Deputy Major Henk Deinum of the municipality of Leeuwarden officially cut the “virtual” opening ribbon. Henk Deinum praised the company: “This is a gem in the Frisian economy. It is a small company with major clients, also internationally. It is an example of innovative entrepreneurship and we are proud that such a great company is located in Leeuwarden. “

CINOPTICS aims to strenghten its brand awareness in the region and offered their guests an opportunity to watch demonstrations of some of CINOPTICS end products, such as the ARGON Simulated Virtual Binocular, IRIS Virtual Microscope, AIRO II Head Mounted Display and ARCTIC Handheld AR Viewer.

As of December 12, 2016, the R & D Department of Cinoptics has moved to a new location. We will continue working on the development of our OEM solutions at: 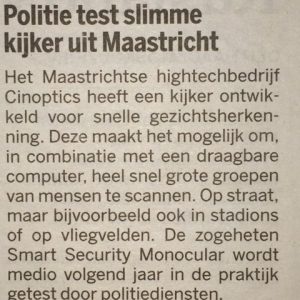 Recently, Cinoptics’ technology and products have received media attention in the Netherlands.

Follow the links to read the articles in Dutch regional newspapers “Leeuwarder Courant” and “De Limburger“.

Also a new project has been revealed: in 2017, Dutch police forces will test a new device for facial recognicion, currently under development by Cinoptics.